Alcoholism intervention is not something familiar to me, but . . . What if?? What if my family members had done an intervention back when I was at my worst with my drinking? Would it have done any good?

As a recovering alcoholic, this show is always interesting to watch. Although the show documents all addictions, I am particularly intrigued by the drunks.

I'm reminded that "There but for the grace of God, go I."

Maybe it wouldn't be a bad idea for all recovering alcoholics to watch this show, especially the episodes about alcoholism intervention. What a clear reminder of where we have been and how precious our sobriety is. Lest we forget . . . 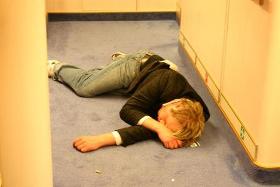 By the time an intervention is even considered, family members have no doubt made numerous, unsuccessful attempts to "fix" their alcoholic loved one. They may have rescued, left, pleaded, given up, only to rescue again.

They loaned money, posted bail, or talked until blue in the face. Bottles and keys were hidden. They may have participated in hiding the truth by their own denial. There has been disgust, anger, worry, and fear. Every gamut of emotion and behavior. Remember, alcoholism is a Family Disease.

By this time, an attempt at an intervention is the last resort. But is it just one more attempt at a forced solution? It's a drastic measure that may not even work.

Why? Because that's the baffling nature of alcoholism. Most alcoholics can't be helped until they are ready to reach out for help on their own. And now you're trying to force the alcoholic into a recovery program.

I know in my own case, no one could tell me a thing about my drinking. My denial was rock solid. I resented anyone who stood between me and the alcohol. So if I had been confronted by family members in the setting of an alcoholism intervention, I don't know if I would have felt loved or ambushed. I'm thinking the latter . . .

Still, I do believe that alcoholism intervention is a viable solution for many families that live with the disease of alcoholism. This is most certainly true if the alcoholic's problems have progressed to the point where she has become a danger to herself or others. The intervention then becomes a life-saving choice.

Here's my understanding of what happens at a typical alcoholism intervention.

First of all, there are professional addiction intervention services that deal exclusively in this area. Preliminary planning meetings are held with friends, family members, even co-workers and employers who wish to participate in the intervention. A professional substance abuse counselor helps the participants understand what to expect (and what not to expect) from the intervention. Plans are laid out for the actual event.

For What It's Worth

Now, here's where my opinion comes in. If at all possible, the alcoholic should not be confronted while drunk. If she's had anything to drink at all in the previous hours, it will be an absolute waste of time. How do I know? Remember, I'm an alcoholic. I lived this stuff.

Family members, even professionals who are non-drinkers may not realize just how drastically alcohol affects our behavior and our thinking. Please see my page called Alcoholic to Alcoholic (coming soon) to read more about a different kind of intervention described in the Big Book of Alcoholics Anonymous.

An alcoholism intervention is basically this: Directly confronting the alcoholic with how her drinking has affected the people who love her. Family and friends are allowed to "have the floor" and tell the alcoholic in their own words how they feel. This can be a very powerful and cathartic experience for all concerned.

The ultimate goal of an alcoholic intervention is to get the process of recovery underway. Arrangements at a previously selected treatment facility have been made, and the alcoholic must immediately make a choice to go. "Let me get back with you" is not an option.

A common fear for family members and friends is whether the alcoholic will feel ambushed and betrayed by an alcoholism intervention. Some may even decline to be part of the "team" out of a sense of misguided loyalty.

New techniques in alcoholism intervention include making the alcoholic aware of the intervention plans. He is told before the fact that the family is consulting with professionals about his drinking. There may be something to be said for this new method since the alcoholic has time to contemplate the damage he is causing to the relationships in his life.

If it is true that an alcoholic must hit bottom before he is ready to get help, an alcoholism intervention just may effectively raise that bottom.