Depression and Alcoholism
What's the Connection?

Do Depression and Alcoholism go hand in hand? As a recovering alcoholic, I think so. Just my opinion. I am convinced that there is a connection between clinical depression and alcoholism.

As I have stated before, I am not a psychologist, a medical doctor, nothing of the sort. But sometimes the best judge of a matter is the person who has lived through it.

I have clinical depression, an inherited disease. I grew up in the 60's and 70's, and people just didn't acknowledge this sort of thing. When I look at my family tree, I wonder whether drinking became a convenient, yet unconscious way for certain members of my family to self-medicate. 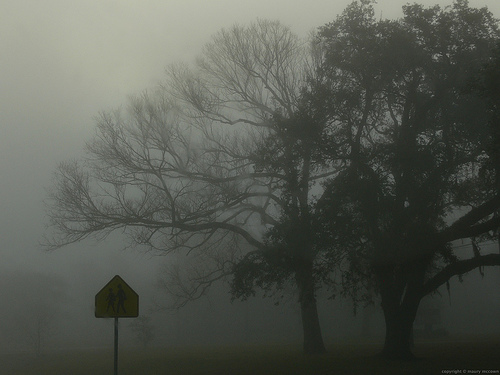 Depression can feel like this picture looks - and not just on rainy days. It feels like this ALL THE TIME. So if you grow up in an environment where the alcohol flows freely, it becomes the perfect solution. Why? Because it works.

Let me restate that. In the skewed thinking of an alcoholic, it appears to work. Depression is lifted temporarily with a few drinks.

Which came first in my life?
The Chicken or the Egg?
Depression or Alcoholism?

During all the years I drank, I never found it necessary to seek help for depression. Why should I? Alcohol did the trick. It altered my state of mind, changed my mood, and numbed me sufficiently so that I never knew I suffered from clinical depression.

Once I got sober, I had all these conflicting feelings. On the one hand, I felt a new sense of freedom, happiness, and true friendship with my fellow AA members. I smiled, laughed, and had more fun than I had had in years. (Yes -- it is not all seriousness; AAs absolutely insist on enjoying life!)

I think this is a very common occurrence - this connection between depression and alcoholism. I have attended enough meetings of Alcoholics Anonymous to know that I am not the only recovering alcoholic who begins to feel incredibly depressed, even in the face of improvements brought on with sobriety.

My problems came to a head in 1998, at three years sober. My brother, who himself suffered from depression and alcoholism, died suddenly of an apparent heart attack. We later discovered that it was not a heart attack at all. He died as a result of an enlarged heart - alcoholic cardiomyopathy.

I can't begin to tell you the devastation I felt at my brother's death. He and I were very close, not just in age (11 months apart) but also as brother and sister. We had a unique and special bond of love and friendship.

The word "forsaken" comes to mind. I just couldn't understand how God could take him so suddenly and at such a young age. He was just 43, and such a wonderful, sweet and loving man.

My depression worsened to the point where it was very difficult to function in my daily life - especially at work. I felt an intense sadness and remember wondering if the lump in my throat would ever go away.

I made a decision to see an addiction psychiatrist because I wanted help from someone who understood the correlation between my depression and alcoholism. He prescribed antidepressants, and I saw him regularly for follow up appointments. It took 6-9 months before he was able to come up with a combination of medications that worked for me.

Once I began to feel some relief, it was like this huge light bulb came on. "So this is how other people feel. It was like putting on a pair of corrective lenses for the first time after going through life not able to see clearly. I realized that all my life, even as a child, I had lived in this sort of underlying, low-grade depressive state.

So, as you can see, I am a believer in antidepressants for those of us in recovery if that is what is needed. Sometimes it is just not enough to quit drinking to get back on track emotionally.